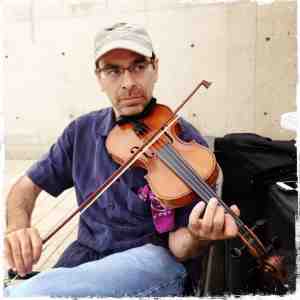 I’m Howard Rains and I was born here in Texas. My family has been from this state from way back and I play the same fiddle that my dad, my grandfather, and my great grandfather played. My grandfather was an east Texas historian, collector of folklore, and a musician, so it naturally fell that I should take an interest in the history of local music.

When I inherited my family fiddles, I already had a strong interest in traditional music. I pursued Appalachian styles and learned from some truly great fiddlers but felt like I needed a deeper connection to the fiddle styles of Texas. Around this same time, I met an old fiddler named Stafford Harris in Nacogdoches and learned some music from him. I began to collect and learn old style Texas tunes and even dredged up some family tunes. As I delved deeper into learning these earlier tunes and styles, I realized that there was a trove of wonderful music that was nearly forgotten in our state and began to truly work to collect, preserve, teach, and play this music.

I also realized that preserving this music is my life’s work as a musician. Occasionally I will learn what I call “foreign tunes,” meaning tunes from other states, but my focus is on these old Texas tunes and styles. This connection to the music has also bled into my artwork as I like to travel around and visit and listen to other fiddlers around the country and paint and draw them, essentially “collecting” their image, through the filter of my brush, just as I do fiddle tunes.

Recently, I have been performing with the incredible Kansas fiddler, Tricia Spencer who grew up in her own family fiddle tradition. Together we have been exploring the connections between the early Texas styles and the older midwestern styles played by her family.