AJ Srubas (fiddle), Aaron Tacke (banjo, vocals), and Rina Rossi (guitar, vocals) are old-time and early bluegrass music devotees who love to spread their excitement about this music wherever they go. As often as possible, they are joined by the multi-talented Nokosee Fields on bass. They like playing tunes and songs for you, and enjoy teaching and leading workshops, too.

Traditional music of the Southwest, and Native American fiddle music

Lone Piñon is an acoustic conjunto from Northern New Mexico whose music celebrates the integrity of their region's cultural roots.  Multi-instrumentalists Noah Martinez and Jordan Wax use the fiddle, bajo quinto, accordion, quinta huapanguera, mandolin, guitars, and bilingual vocals to play a wide spectrum of the traditional music that is at home in New Mexico.

Cajun dance hall music from the dusty back roads of southwest Louisiana, coast to coast and around the world.

Jesse Lége defines traditional Louisiana dance hall music. His unmistakeable hard driving style of accordion play and his powerful voice will get even the most staid listener up on the dance floor.  Named Vocalist of the Year, Band of the Year, Song of the Year (for "Mémoires Dans Mon Coeur"); in nearly 40 years of playing, singing and living Cajun music, Jesse Lége has seen and done it all. In 1998 Jesse was inducted into the Cajun Music Hall of Fame.

Big Cedar Fever is a string swing band out of central Texas that specializes in Western swing and jazz. Three part harmonies and tight musical arrangements draw listeners in, only to be taken away by the classic style and lyrics that recall another time and place.

Formed in January of 2018, the trio includes Georgia Parker on jazz-box guitar, Ian Lee on fiddle, and Nick Lochman on the upright bass. With all three sharing vocal duties and trading instrumental solos,

The Barn Owls with Sharon Isaac

The Barn Owls play Old-Time music from the Appalachian region of the US, circa late 1800's and early 1900's. These fiddle-based tunes were heavy influences on the bluegrass, folk and acoustic scene of the mid-1900's. The tunes were often the backbone of a community square dance, where a 'stringband' would provide the music for a dance caller to coach the to and fro.

The Here & Now with Tony Davoren

The Here and Now is one of Austin's best regarded Irish bands.

Tony Davoren hails from Hollywood Co. Wicklow, Ireland. Tony has appeared on many of the great stages of the world, including Radio City Music Hall, and performed for the Prince of Wales in the Royal variety show in The Albert Hall in London. He has recorded with Sting, The Chieftains, and Sinead O’Connor, and is featured on two Grammy Award-winning recordings: The Long Black Veil and Riverdance—The Show. 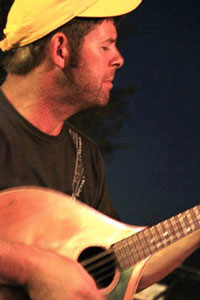 Traditional, old-time and gospel music from a Texas family tradition.

Lloyd and April Wright are lifelong Texans from musical families.

April grew up with a father who played fiddle, and she still performs with him
every Sunday morning at the Larry Bruce Gardens in Kennard.

He was named Dulcimer National Champion in 2000!

Traditional and Old-time duo from Dallas-Fort Worth.

In the beginning, there was a note. And the Lord said, "You know, that sounds pretty good."  Millions of years passed, and the Pace & Barber was born, and continues to perform to this day. So there you go.

In their prime the Flat Earth Rounders were the all-stars of the North-South Central Austin old time square dance scene. After a much storied and somewhat checkered world tour, they faded back into the kind of obscurity that only trendy kids with weird haircuts and too tight jeans are happy to tell you about. Rising like a phoenix from the $1 records bargain box, comes an uptempo banjotastic reunion show that will have you swinging your partner and do-si-doing long into the night. Grab your sweetheart and hold on to your britches!